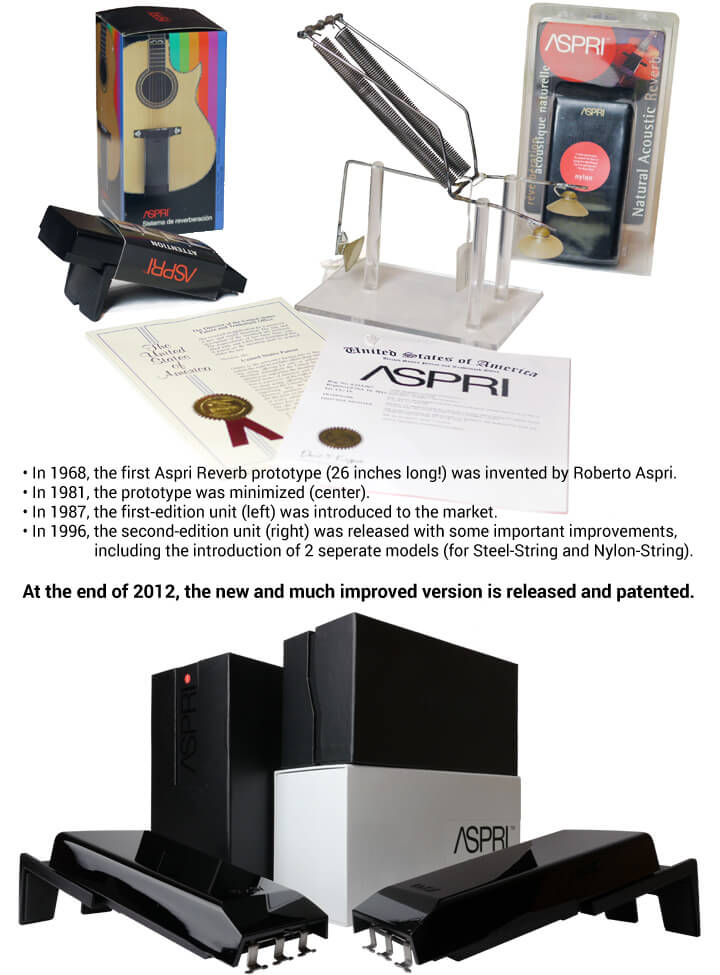 Reverberation is one of the most popular effects used in guitar playing and recording.

The ASPRI reverb system is the only non-electronic sound effect for acoustic guitars that emulates the sound and feeling of playing in a concert hall. No electrical source or batteries or amplification of any kind is required. And there is no alteration, perforation or modification to your guitar.

Roberto Aspri the man behind the ASPRI was inspired by the coils in the spring mattress he slept on as a kid. “I noticed how my mattress would sort of echo when I moved around on it, so when the reverb unit on my amp broke, I got this crazy idea to make a spring reverb that would attach to an acoustic guitar.”

Roberto began work on an alternative to electric reverb hoping to make something that would sound as good but wouldn’t require electricity.

Several years of trial-and-error followed with Roberto accepting suggestions from a wide range of guitarists including virtuosi Liona Boyd and Alexandre LaGoya.

The ASPRI has been awarded a Canada Award for Business Excellence in the Industrial Design category, and the Prix Graphisme Québec for the originality of its packaging. The device has also been featured in Quebec City’s Musée de la Civilisation as an example of Canadian inventiveness.

The next few years saw thousands of units sold in Canada, the USA and worldwide including Germany, Spain, Italy, Malaysia, Japan, Australia, the Netherlands, etc…

Nothing is more breathtaking than the natural sound, and no digital processors can replace the real deal… A spring reverb with one objective: to inspire.

We, at ASPRI, are overwhelmingly happy with the response we’ve been getting from wonderful artists (you!) around the world. It brings us great joy to hear back from our customers and also receive either a quote or a video clip of happy artists enjoying our product. We never thought we would bring this project to absolute new heights, as this has been a more niche, though very passionate, project of ours for the last several years (since our latest “2012” model). With such wonderful response we decided to up the notch a lot further and push our product out there, for your enjoyment.

Experience the reverb that has inspired countless artists to write breathtaking new work. Take your dreams with you, wherever you play, and showcase them to the world only with the Aspri.